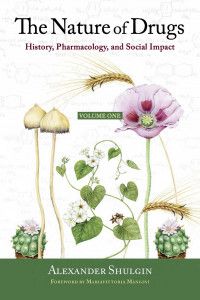 The Nature of Drugs: History, Pharmacology, and Social Impact, Volume I

The Nature of Drugs presents Alexander Shulgin’s popular San Francisco State University course on what drugs are, how they work, how they are processed by the body, and how they affect our society. This is the first Shulgin publication since 2011, when The Shulgin Index was published.

News Alert! Read the first 24 pages of the book that Psychedelics Today calls “the portrait of a courageous, beautiful soul.” Lucid News says “nearly every page is a treasure trove of fascinating facts and stories.” Missed the City Lights symposium inspired by Sasha’s new book? Click here to see videos of all five panels.

THE NATURE OF DRUGS EBOOK: HISTORY, PHARMACOLOGY, AND SOCIAL IMPACT, VOLUME I

The Nature of Drugs: History, Pharmacology, and Social Impact, Volume I was transcribed from the original lectures recorded on cassette tapes by Ann Shulgin at SFSU in 1987. This class was taught as an introductory course on drugs and biochemistry, and this transcription is a unique document being both a historical record of Sasha’s teaching style and the culmination in many ways of his philosophy on drugs, psychopharmacology, states of consciousness, and societal and individual freedoms pertaining to their use, both medicinal and exploratory. The Nature of Drugs is the story of humanity’s relationship with psychoactive substances from the perspective of a master psychopharmacologist and will enthrall anyone intrigued by this subject.

The full course of The Nature of Drugs will be published in either two or three volumes. Volume I presents Shulgin’s view on the origin of drugs, the history of U.S. drug law enforcement, human anatomy, the nervous system, the range of drug administrations, varieties of drug actions, memory and states of consciousness, and research methods. The discussions in Volume I lay the groundwork for Sasha’s philosophy on psychopharmacology and society, what defines a drug, the nature of a person’s relationship with a given compound, and for extensive examinations of dozens of compounds in Volume II.

“For those of us who were not fortunate enough to attend Sasha’s classes, this book is a fantastic second chance to learn from a brilliant, principled, courageous, idealistic psychedelic chemist whose creations were molecules for psychotherapy, spirituality and celebration, to help humanity wake up and save ourselves.”

The Nature of Drugs begins with a deceptively simple question: What is a drug?

“The definition of a drug is probably one of the most difficult of the lot. Some will be extremely narrow in the definition, requiring that it be a chemical that is used for the treatment of some illness. Others will widen the scope to include anything and everything that in some way affects the living system. Often people will answer with that marvelous, marvelous, catch-all phrase, ‘Well, you know what a drug is,’ or ‘Everyone knows what a drug is.’”

So what is a drug?

This is your invitation to “Just Say Know” and explore The Nature of Drugs with renowned chemist, Alexander Shulgin, in his San Francisco State University lecture hall in 1987. This book is a transcription of the original lectures recorded by Ann Shulgin during his classes, and stands as the culmination of his philosophy on drugs and the societal and individual freedoms pertaining to their use––both medicinal and exploratory. Volume I presents the origin of drugs, the history of U.S. drug law enforcement, human anatomy, the nervous system, drug administration methods, varieties of drug actions, memory and states of consciousness, and research methods.

Alexander “Sasha” Shulgin was undoubtedly one of the most pioneering chemists of this century. Completing his Ph.D. in biochemistry at the University of California, Berkeley in 1955. In 1966, he set up a home-based laboratory on his ranch in Lafayette, California, where he synthesized more than two hundred novel psychoactive compounds. A bold explorer of the frontiers of neurochemistry, Shulgin tested the majority of the substances he synthesized on himself, and then with his wife and co-researcher, Ann.