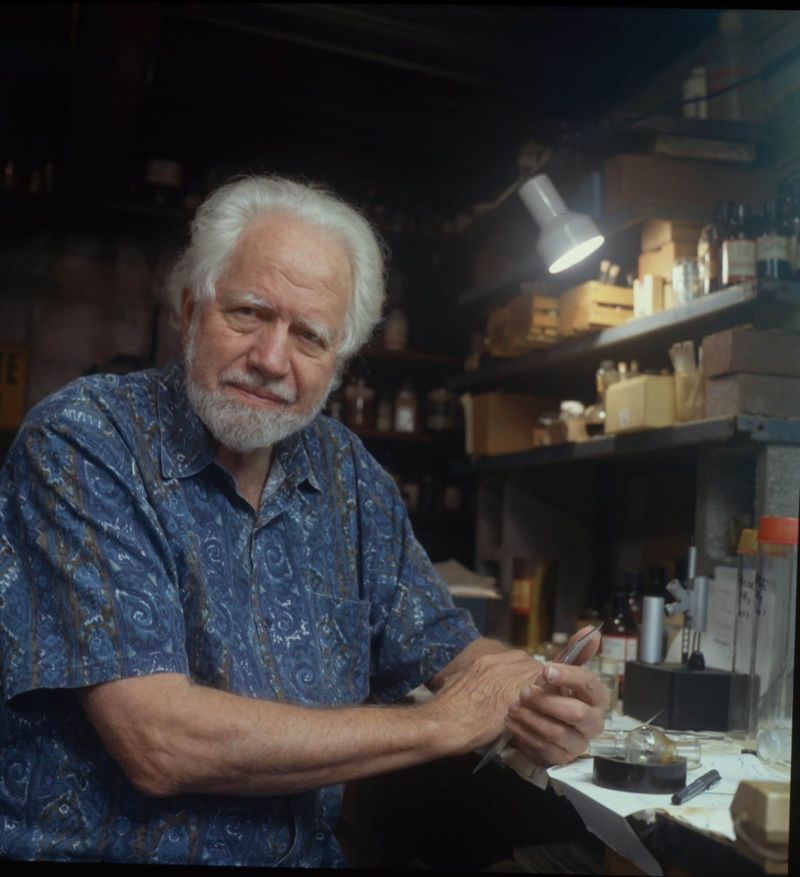 Alexander Shulgin (June 17, 1925–June 2, 2014), known to friends and admirers as “Sasha”, was a biochemist and pharmacologist best known for his synthesis, creation, and personal bioassay of hundreds of novel psychoactive compounds.

Sasha was born in Berkeley, California. He first began his study of organic chemistry at Harvard University. In 1943 at the age of 18, Sasha left Harvard to join the U.S. Navy. After serving in World War II, Sasha returned to Berkeley to earn his PhD in biochemistry from the University of California, Berkeley, and complete post-doctoral work in the fields of psychiatry and pharmacology at University of California, San Francisco. After a short period working at Bio-Rad Laboratories as a research director, he joined Dow Chemical Company as a senior research chemist.

While at Dow, Sasha’s interest in psychopharmacology was inspired by a profound experience with mescaline:

“I first explored mescaline in the late ’50s… Three-hundred-fifty to 400 milligrams. I learned there was a great deal inside me.”
— Alexander Shulgin, Los Angeles Times (1995)

Sasha first tested his new creations on himself, starting with minuscule doses and cautiously ramping them up until some manner of effect was noticed. Beginning in 1960, following Sasha’s initial bioassays, a small group of friends began to join in regular group testing sessions, meticulously recording their results. The Shulgin Rating Scale was developed to quantify the experiences and effects of the substances. Working primarily with phenethylamines and tryptamines, a body of objective and subjective reports was created for hundreds of psychoactive chemical compounds.

After a rash of bad press about street drug abuse in the 1960s, Dow became concerned with the possibility of an adverse public reaction to the nature of Sasha’s work, and requested that he cease to publish as an employee of the company. Sasha subsequently ended his career with Dow in the mid-1960s to pursue independent research and employment as a consultant. He began teaching classes in local universities and at the San Francisco General Hospital.

In the fall of 1978, a year after his first wife Nina had passed away from a stroke, Sasha met Ann Perry, a newly divorced psychedelic enthusiast who would become his most ardent supporter and eventual partner. They were married in 1981.

Sasha also served as an expert witness in court cases and occasionally conducted chemical analysis for law enforcement; over the years, he received several awards from the DEA. In 1988, he authored the definitive manual Controlled Substances: Chemical & Legal Guide to Federal Drug Laws (with an updated second edition appearing in 1992). In order to carry out his research, Sasha obtained a DEA Schedule I license for an analytical laboratory, allowing him to possess and synthesize scheduled substances.

In 1992, Sasha and Ann published PIHKAL (Phenethylamines I Have Known and Loved): A Chemical Love Story. The volume is presented in two parts: Book One explores the story of a pharmacologist and his wife. Book Two describes a catalog of phenethylamines, with details about synthesis and reported activity.

In 1994, two years after the publication of PIHKAL, the DEA raided the Shulgin lab. In the 15 years preceding the publication of PIHKAL, two announced and scheduled reviews had failed to find any irregularities. Nevertheless, this time the agency fined Sasha for violating the terms of his DEA license’s by running analytical tests on street samples of potentially controlled substances that were not part of a pending legal case. Rather than having unreasonable restrictions placed onto his work by the government, Sasha decided to turn in his DEA license and entirely stop working with scheduled substances.

Despite this setback, the Shulgins continued to develop and pioneer new psychoactive substances, carefully working within the boundaries of the law. In 1997, Sasha and Ann published TIHKAL (Tryptamines I Have Known and Loved): A Continuation, further detailing both their love story and the chemical research in the area of psychoactive tryptamines. In 2002, Sasha and Wendy Perry co-authored The Simple Plant Isoquinolines, which describes those plants that contain isoquinolines and provides the names and details of their chemical structures. The Shulgin Index, Volume One: Psychedelic Phenethylamines and Related Compounds—an eagerly awaited comprehensive catalog of these chemicals produced in the style of The Merck Index—was released in March 2011, with the assistance of co-authors Tania Manning and Paul F. Daley.

Over the past few years, Alexander Shulgin saw the effects of aging. On April 8, 2008, at the age of 82, he underwent surgery to replace a defective aortic valve. On November 16, 2010, Sasha suffered a stroke. In December of 2010 he suffered another stroke, followed by skin-grafting surgery to save his left foot from an amputation. Around this time, Sasha also began to start showing early signs of age-related dementia. In early 2014, it was confirmed that he had terminal liver cancer.

Sasha lived out the final years of his life at his home in Northern California, assisted by extraordinary caregivers and supported by his family and friends. He passed away on June 2, 2014, at exactly 5 o’clock in the afternoon. He was surrounded by loved ones, listening to Buddhist meditation music, and his going was graceful, with almost no struggle at all.